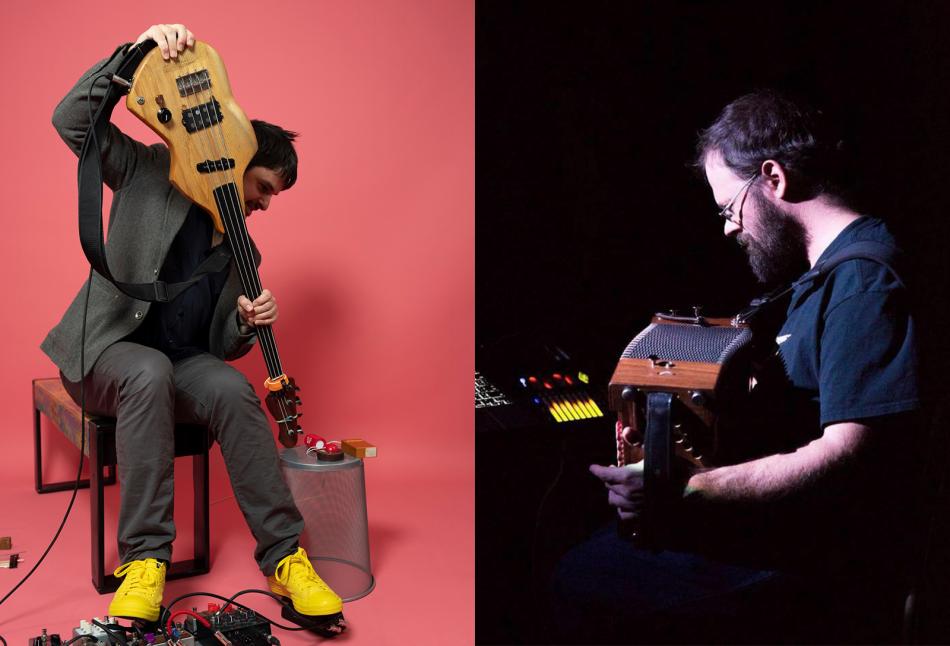 Éric Normand and Robin Servant both develop a unique and roundabout way of playing their instrument like you've never heard it before. They lead careers amalgamating international collaborations, improvisation, composition and sound installation.

Éric Normand is an improviser, bassist, instrument designer, composer, songwriter, singer and record and concert producer. He defines himself as an epidisciplinary musician, a free electron driven by its yearning for meetings.
As an improviser, he develop a personal and radical playing on a homemade electric bass equipped with mics and objects feedbacking and vibrating in small electronic devices, creating electric flux interrupted by the instrumental gesture.

He also composes for ensemble and multi-disciplinary projects.

Interested in collective creation and orchestral improvisation, he lead for seven years the Grand groupe régional d’improvisation libérée (GGRIL), a 15-piece band that have worked with composers such as Evan Parker, Jean Derome, Robert Marcel Lepage, and Michael Fischer.

His music has been programmed by or performed in several festivals in Canada, Australia and Europe. It has also been broadcasted by Radio-Canada, Australian Broadcasting Corporation, CBC, Radio Grenouille, and several college radio stations.

“… one of Canada’s most creative musical visions.” — Stuart Brommer, The Wholenote (Canada)

Robin Servant is a musician with a passion for traditional musics, improvisation and composition.  He has worked in many traditional music groups (trio Salicorne, Tord-Vis, la Marée montante) and improvised music groups (GGRIL, Escarbilles).  He tries to make connections between popular traditions and contemporary musics.  His work is organised around 2 axes : sharing the experience and experience of the moment.

With Du souffle et de l’espace, he explores the acoustic of the places he visits by making them vibrate with his accordion, drivers  and electronics.

Robin also works as a composer and a sound designer for the screen.  He has collaborated in over 50 productions over the years.

In a addition to his solo recording, he also released this year Double entendre a pandemic postal collaboration with Halifax guitarist extraordinaire Geordie Haley, both available on Tour de Bras.

Presented by Upstream Music with support from suddenlyLISTEN